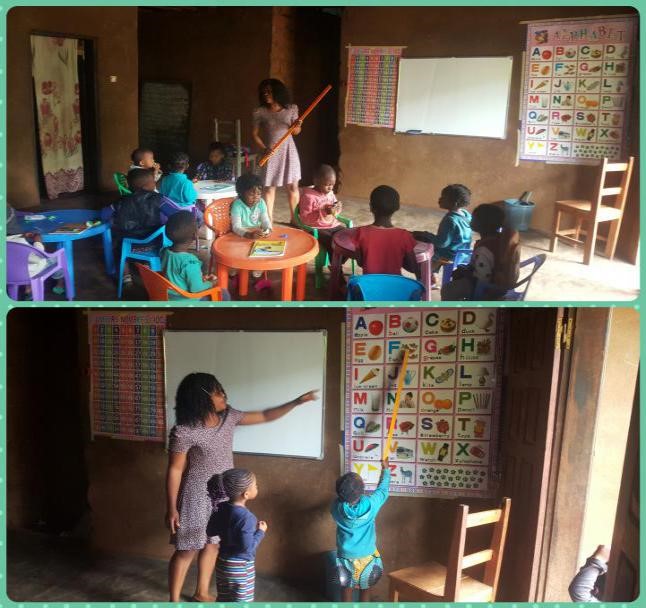 Since 2016, civil disobedience operations, school boycotts, destruction and closure of schools have greatly affected children of school going age in the North West and South West English-speaking regions of Cameroon. It is in line with the objective of “Leaving No Child Behind” in education, that a handful evidence informed primary educators in rural setting of Bambili, North West Cameroon like Petra, braved the odds and set out to organize Community Home Schools for affected children aged 3-5years.

Petra is one of the educators that ISED has been working with, within her Educator Empowerment strand aimed at equipping teachers with the necessary skills for evidence based pedagogic practice. After learning of how beneficial early childhood and Pre-school interventions could be in preparing children for school and academic success, Petra bravely took up this initiative to gather children aged 3-5years in her neighborhood within her pre-school provision.

In her interview with ISED about her pre-school initiative, this is what Petra said concerning her motivation“I can’t afford to sit and do nothing for these children after learning how effective early childhood interventions can be in preparing children for academic success.”

“Overall, the evidence suggests that early years and pre-school interventions have a positive impact, delivering an average of around five additional months' progress. The approach appears to be particularly beneficial for children from low income families.” (Education Endowment Foundation, EFF). Our experience with working with learning and teaching evidence such as EFF toolkits, Edutopia reviews and others is that there is the need for contextualisation given that the educational landscape context of Cameroon is different in a good number of ways from those of the developed world wherein the studies surrounding this evidence were conducted. ISED is convinced that CEHS could provide a setting for the implementation of readymade evidence as well as a teaching and learning research priority setting facility to inform new evidence tailored to the needs of Learners in Cameroon.

It could be interesting to know that Petra started up by using her family home parlour as her classroom and a set of kitchen chairs borrowed from neighbors for the children to sit on during classes. With assistance from ISED, Petra now has a more decent teaching environment with appropriate teaching equipment and better setting for children to learn. At the moment Petra has 13 children  attending her pre-school and this number has the potential of increasing due to the interest

that other parents are expressing and the worsening nature of the armed conflict in the North west and South west English-speaking regions of Cameroon.

What is ISED’s Role in Community Evidence Home Schools (CEHS)?

It is worth mentioning that, ISED is only accompanying a community initiated, run and owned endeavor to provide education to these affected children of school going age in conflict zones of the North West region of Cameroon, who have been deprived of their basic right to education for 03 academic years now and still counting. ISED organises training sessions with teachers of community home schools to introduce them to evidence, build their capacity to access, interpret and implement relevant evidence in view of improving children’s learning outcomes.   Community home pre-school initiatives like Petra’s could be a substitute for formal pre-school facilities as the later is scarce and expensive for most children living in rural settings, given that it is almost entirely left in the hands of private sector education facilities. As a result, most children living in typical rural settings in Cameroon do not have access to pre-school interventions and start school from primary one, thereby missing the benefits of early years pre-school intervention.