EIDM in Africa: innovative at its core 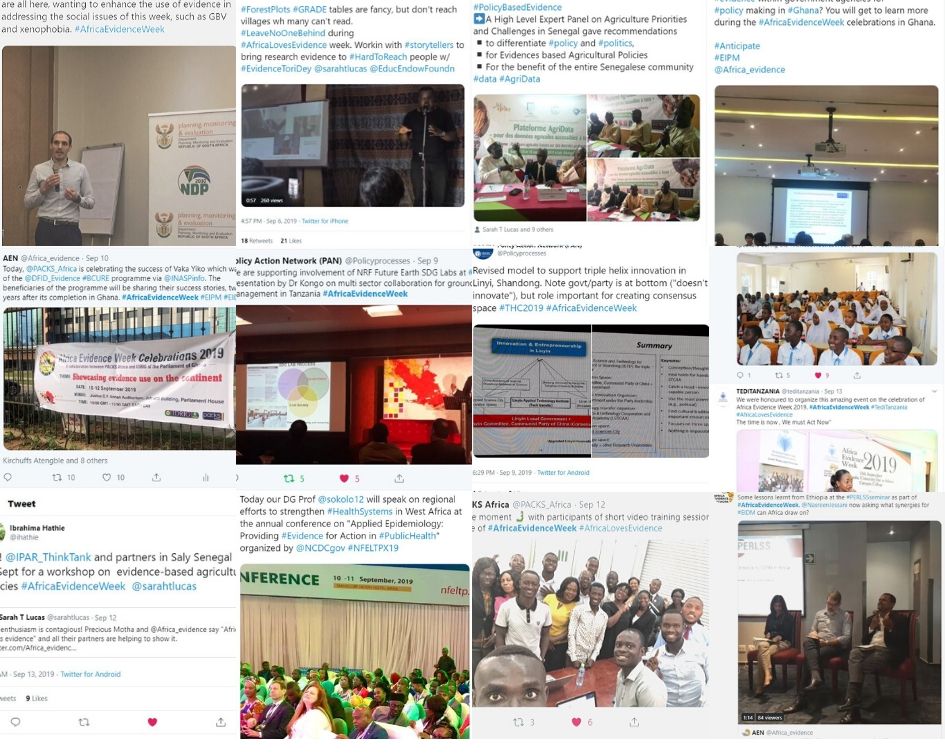 One of the things the Africa Evidence Network (AEN) secretariat this year has focused on was showcasing innovative evidence-informed decision-making (EIDM) in Africa. Some of the highlights from 2019 include:

The Network started the year in search of its second receipt of the Africa Evidence Leadership Award. This year the AEN moved from applications to a nomination process and the EIDM community embraced this new process with much enthusiasm. The AEN received a great number of nominations in acknowledgement of EIDM leaders from across the continent, and this award continues to showcase the work that has been done by EIDM leaders in the region. AEN members voted and a winner was announced, with two honourable mentions, on 31 May 2019.

2019's winner will present a keynote address on their work at Evidence 2020, the biennial conference of the AEN, taking place in Uganda in September next year. The winner will attend another international event or course to further raise their profile and the profile of Africa in the EIDM field. Ms Mapula Tshangela, a policy advisor at the national government Department of Environment, Forestry and Fisheries in South Africa, is the second recipient of the award. Here she shared with us her feelings about the colleagues who have supported, and continue to inspire, this evidence champion to great heights. In addition to the winner of AELA, two honourable mentions were selected for their impressive work in EIDM in Africa: Ms Ndi Euphrasia Ebai-Atuh of Cameroon and Prof Jesse Uneke from Nigeria.

As a secretariat, we are always looking for innovative ways to understand, inform, and promote the EIDM landscape across the continent. The secretariat has been working on rebuilding the AEN's website to shape it into a hub for EIDM in Africa. The purpose of the hub is to create a platform in which we as the EIDM ecosystem in Africa can advocate for African innovation, excellence, and leadership in EIDM; learn about the EIDM landscape and innovations in Africa; inform and can be informed of the latest EIDM developments; and connect as a community dedicated to making EIDM in Africa a reality. The first phase of the new EIDM hub launched in early September – just in time for the Africa Evidence Week celebrations.

With a growing AEN membership of close to 3000 members, the Network secretariat is always thinking of new ways to showcase the champions who support EIDM every day. Africa Evidence Week - a concept inspired by the International Initiative for Impact Evaluation (3ie) Evidence Week - was fashioned to celebrate Africa’s EIDM and showcase real-life examples of evidence-use in Africa and support African evidence champions in their evidence advocacy.

On 19 July 2019 the AEN secretariat and collaborators announced the first Africa Evidence Week designed as a virtual celebration of Africa’s EIDM. AEN members were invited to participate in this week-long event which took place from 9-13 September 2019. The secretariat coordinated the Week by promoting the content of participating organisations on its communication platforms, such as the EIDM hub, webinars, Twitter, LinkedIn, and YouTube. With overwhelming support from members and their organisations, the Week showcased over 64 incredible EIDM activities across the continent with the support of 31 organisations from 14 African countries. The Africa Evidence Week programme included in-country events, Twitter conversation starters, webinars, live-streamed events, blogs, and videos.

Highlights from the week included a series called “Why I fell in love with EIDM”: these videos featured messages on that topic from emerging EIDM leaders within Africa. Over 900 people from across Africa attended in-country events hosted by thirteen organisations during the week. Blogs were one of the most popular ways that organisations participated in Africa Evidence Week with twenty-two blogs being posted in five days. Twitter conversation starters promoted sharing of EIDM resources, such as reports and policy briefs from various organisations. These conversations starters increased engagement and interaction on Twitter, and as a result, the #AfricaEvidenceWeek hashtag attracted three hundred and ninety-nine online participants from 15 different countries representing 91 organisations that reached over 1.2 million people on Twitter. More highlights are captured in the AEN’s special edition newsletter.

The success of the Africa Evidence Week received recognition and support from international organisations including International Initiative for Impact Evaluation (3ie), FHI 360, and the Collaboration for Environmental Evidence (CEE). The AEN secretariat could not have been happier to be part of showcasing the amazing innovative EIDM work done across our continent! We are committed to continue to showcase this work at the next biennial conference, taking place in Uganda.

The first three conferences of the AEN were hosted in South Africa, so the secretariat was thrilled to announce in 2019 that the next biennial conference will be hosted in East Africa! The Evidence 2020 conference is happening from 21-25 September 2020 in Uganda. This preeminent event brings together the widest range of EIDM stakeholders from across the continent and beyond into one space. Designed to be a working conference, the aim of Evidence 2020 will be for delegates to spend their time networking and working together to produce actual outputs that can showcase the EIDM excellence of Africa by the end of the week. Evidence 2020 promises to push boundaries and have innovation at its core.

Planning for this conference has started with the help of our conference organisers, Conference Consultancy SA (ConfSA). In late November 2019, members of the Evidence 2020 planning committee and ConfSA travelled to Uganda to explore venues, service providers and engaged with our co-host Mr Peter Kaggwa, MD of Events Warehouse. Look out for the first blog in January 2020 where the team will share the outcomes of the trip and make further announcements about Evidence 2020. We look forward to seeing you at the conference to show the world that #AfricaLovesEvidence!

We are delighted to be part of a community across Africa that in 2019 innovated to enhance EIDM, and we look forward to more in 2020!